Can Regular Yoga and Meditation Improve Your Brain Function?

There is increasing evidence that yoga and meditation can improve our memory and attention, both help us to function at a higher level at work, home or in school. Furthermore, these benefits occur whether you’re new to yoga and meditation or a long-time practitioner, and studies show it might even help starve off age-related neural decline. The reason, neuroscientists have discovered, is that certain areas of our brain undergo positive structural changes when we meditate. Because the brain exhibits plasticity, which means it has the ability to change, whatever you experience will be reflected in – and have impact on – your brain structure.

Several groundbreaking studies have shown how meditation, especially when practiced over the long-term, can produce significant changes in the structure and mass within certain brain regions. For example, a continued meditation practice can produce a thickening of the cerebral cortex, the part of the brain that plays a key role in memory, attention, awareness, thought and language. Like a body builder who pumps iron, the bigger his biceps get, the heavier weights he can lift. Likewise, when we meditate, we exercise the parts of the brain that involve the regulation of emotion and mind-body awareness that lead to changes in brain activity and structure, which in turn improve our memory and attention.

Studies show how meditation can produce significant changes in the structure and mass within certain brain regions.

One of my fellow researchers, Dr Sara Lazar of the Psychiatric Neuroimaging Research Program at Massachusetts General Hospital, found these brain changes to be especially apparent in long-time meditators. In her 2005 study, for example, MRI brain scans were used to assess cortical thickness in participants with extensive meditation experience (averaging about 9 years of experience and 6 hours per week of meditation practice), and a control group that did not practice yoga or meditation. Dr Lazar found the brain regions associated with attention, sensory, cognitive and emotional processing were thicker in meditation participants than those in the control group who did not engage in yoga or meditation.

This was the first significant study (of now more similar studies) to provide evidence for a link between long-term meditation practice and structural brain changes. Equally exciting is that the greater prefrontal cortical thickness found in the meditation group was most pronounced in older participants, suggesting that extensive meditation might also offset age-related cortical thinning. It appears that the brain regions associated with attention and sensory processing, which frequently diminishes over the years, can remain more youthful in those people who continue to practice meditation.

The brain regions associated with attention and sensory processing can remain more youthful.

In another interesting study conducted at the Laboratory of Neuro Imaging at UCLA, differences in the brain’s anatomy and structure called gyrification (or cortical folding) were also discovered in people who meditated. Although the implications of this research remain to be fully established, the findings from this study support the possbility that meditation can lead to changes in regulation of activities including daydreaming, mind-wandering, and projections into the past or future, and a possible integration of autonomic, emotional, and cognitive processes.

And while research reveals long-term meditation can produce structural changes in specific areas of the brain that enhance our ability to learn, one does not have to practice for thousands of hours to reap the positive brain benefits. Dr Lazar also found that these increases in grey matter in some regions of the brain occurred after just 8-weeks of Mindfulness-Based Stress Education (MBSR), a formal program involving meditation and some yoga practice. These results suggest that even short-term participation in meditation-related practices can lead to changes in grey matter concentration in brain regions that are involved in learning and memory processes, as well as in emotion regulation.

Yoga-Brain Fact: If you practice yoga and meditation techniques on a regular basis, your brain will be better able to cope with stress and emotion. This brain enhancement will help you to maintain higher levels of learning and memory.

Long-term meditation can enhance our ability to learn.

Think about how we feel when we’re stressed. We might eat more, lose our appetite, sweat profusely, or simply want to bury our troubles in mindless television or computer games. What happens to our brains when we are under stress is that our bodies increase the secretion of cortisol, a well-known stress hormone. When faced with sustained, high levels of chronic stress, the associated high levels of cortisol can actually be toxic and even fatal to our brain cells. Because our hippocampus, the part of the brain responsible for memory and learning, is particularly vulnerable to high sustained cortisol levels, we may ultimately compromise our learning and memory capacities when faced with uncontrolled chronic stress. By managing stress through yoga and meditation, you can actually improve your memory, concentration, and your ability to learn.

While researching the effects of long-term yoga and meditation, I found an intriguing study that reported improvements in attention, mood and stress over a very short time period. When a group of 40 undergraduate students were given 5 days of 20-minute meditation training, this group showed significantly better attentional abilities and control of stress than a similar control group of 40 students given only relaxation training, including greater improvement in attention, lower anxiety, depression, anger and fatigue and an elevated mood.

There was also a significant decrease in stress-related cortisol.

These studies, which are just a few of those being conducted today, clearly show a strong relationship between our ability to maintain attention and our responsiveness to stress and emotional reactivity. In other words, the more one practices the contemplative skill of controlling attention through meditation and yoga, the more one has a manageable stress response and improved emotional reactivity. Ultimately, our cognitive performance is most efficient and at its optimal level when we are more in control of our stress and emotions.

Our cognitive performance is most efficient and at its optimal level when we are more in control of our stress and emotions.

The Effects of Yoga on Memory and Decision Making

Yoga and meditation not only make our brain more efficient, they also improve brain activity related to decision-making and cognitive performance. In a research study conducted at the University of Illinois at Urbana, scientists compared the effects of a yoga exercise session to aerobic exercise, the results showed that the memory retention and cognitive performance after yoga was significantly superior (ie. shorter reaction times, increased accuracy) to aerobic exercise. The reason yoga can be better for the brain than aerobics (although both are good), is that it allows us to cope with stress and emotions more effectively.

Research clearly indicates that yoga and meditation, especially a long-term practice, improves the way our brain functions, including our ability to concentrate and perform well on certain tests. In one study comparing 15 yoga practitioners with a control group of non-practitioners and involving a series of tests for attention, the yoga group performed significantly better. Long-term practitioners of yoga and meditation showed greater attention span, processing speed, attention alternation ability,and performance in interference tests.

Another recent study also showed improvement in cognitive functioning and dexterity among 57 research volunteers who were given tasks requiring attention, visual scanning and motor speed. Each participant was assessed before and after three types of sessions: yoga meditation, supine rest, and control (no intervention). The results showed that the yoga condition was associated with the greatest improvements in psychomotor functioning with no improvement in test skills for those who did not practice yoga and meditation.

Yoga was associated with the greatest improvements in psychomotor functioning.

Many people believe that equation solving and memorisation are the most effective ways to improve one’s mathematical aptitude—all of which can be extremely time-consuming and, to the math phobic, feel like an ordeal. The fact is that sessions of yoga and tai chi can also sharpen your mathematical ability. These were the findings of a Bolo University of Miami School of Medicine study in which 38 adults participated in a session that included two minutes of tai chi movement and two minutes of sitting, standing, and lying down yoga poses. The researchers measured self-reported math computation skills of each participant before and after the session. The findings showed that the tai chi/yoga participants performed better on basic math after the workout. Why? The increased relaxation may have contributed to the increased speed and accuracy noted on math computations following the tai chi/yoga class.

Yoga as a learning tool for students around the world.

Another study providing preliminary evidence that yoga may improve academic performance of children in schools was done on 8OO teenagers in India. The students in this study who were engaged in a yoga program performed better academically than those who did not do yoga. Researchers selected 159 high-stress students and 142 low-stress students. Both groups were given tests in mathematics, science, and social studies. Those who participated in a 7-week yoga program of (poses), pranayama (breathing exercises), and meditation performed better in academics than those who did not do yoga. The study also concluded that low-stress students performed better than high-stream students, showing, once again, that indelible connection between stress and academic performance.

Discover a place of healing where only the best 10 experts from a variety of fields come together to assist you in reaching your health goals. We offer sessions in alternative therapies, and our practitioners provide practical and achievable solutions to your health and well-being issues; and, they do so in a calm and supportive environment. Here, you’ll find a place where you can connect mind, body and spirit and discover how to live a balanced and healthy life. Body, Mind and Spiritual Wellness is a great place to learn about health and wellness and their benefits, and kick start a healthy program that will allow you to relax, take a break from this busy world and find some tranquility.

Life is a Journey 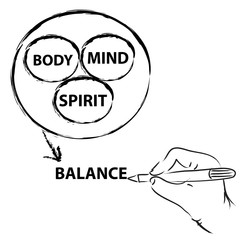